The Battle of Worcester

The Battle of Worcester

360th Anniversary of the Battle of Worcester

Last weekend (7th Septmber 2011) saw the 360th anniversary of the Battle of Worcester, King Charle’s II’s last stand against Oliver Cromwell’s New Model Army. The battle was the final battle in the third phase of the English Civil war, taking place on 3rd September 1651. So important was the battle that John Adams and Thomas Jefferson, 2nd and 3rd Presidents of the United States of America, came to visit the battlefield in 1786. In his diary, John Adams said of his visit: 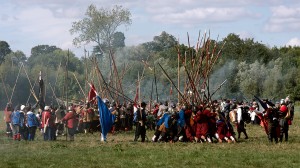 “…Worcester were curious and interesting to us, as Scænes where Freemen had fought for their Rights. The People in the Neighbourhood, appeared so ignorant and careless at Worcester that I was provoked and asked, “And do Englishmen so soon forget the Ground where Liberty was fought for? Tell your Neighbours and your Children that this is holy Ground, much holier than that on which your Churches stand. All England should come in Pilgrimage to this Hill [Fort Royal], once a Year.”

Less than 2 years later Adams and Jefferson were to help write the US Constitution.

On Sunday, 4th September, The Sealed Knot re-enacted the battle in which 16,000, predominantly Scottish, Royalist forces were overcome by 28000 Parliamentarians troops led by Oliver Cromwell. The display took place on Powick Fields on the outskirts of Worcester, close to the site of the actual battle.

About 3,000 men were killed during the battle, of which only a few hundred were on the side of the Parliamentarians. A further 10,000 were taken prisoner. Many of the English prisoners were conscripted into the New Model Army, whilst about 8000 Scots were put to work for landowners in the colonies as far afield as the West Indies.

Charles himself, fled the battlefield eventually making his way to France after 6 weeks spent on the run. 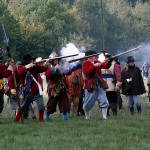 Musketeers from the Sealed Knot (click image for full size) 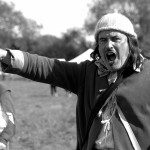 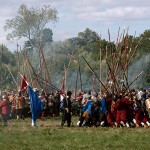 Members of the Sealed Knot re-enact scenes from the Battle of Worcester near Powick Bridge. (click image for full size) 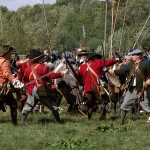 Around 3000 soldiers died that day (click image for full size)